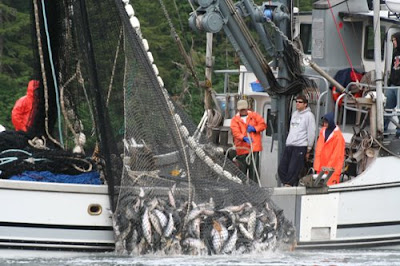 Pebble Mine, Dirty Gold, and the Corporate War on Alaska’s Salmon.

A lawsuit was filed today claiming that all Pebble Mine’s state permits violate the Alaska constitution. Skulduggery surrounding Pebble Mine? Imagine that.

On the receiving end of these legal accusations is the State Department of Natural Resources. The suit was filed today on behalf of eight communities in the Bristol Bay area by plaintiffs including Vic Fischer, one of the drafters of the Alaska Constitution, and Bella Hammond widow of the revered Governor Jay Hammond who had previously said “I think Jay would first and foremost think of protecting that area, mainly the fish and the game.”

At issue is Article VIII of the Alaska Constitution, according to the legal documents.

Article VIII of the Alaska Constitution provides that state land and water resources shall be developed consistent with the public interest; for the maximum benefit of the people of Alaska; to reserve fish, wildlife and waters to the people for their common use; and to maintain these resources on a sustained yield basis. Article VIII further specifically provides that there shall be no disposals or leases of state lands, or interests therein, without prior public notice and other safeguards of the public interest, and that the Legislature may provide for issuance of permits for exploration of the public domain subject to reasonable concurrent use. Under Article VIII, laws and regulations governing the use or disposal of natural resources are to be applied equally to all persons similarly situated. The Alaska courts have found that Article VIII requires the State to hold public resources in trust for public use, and that the State has a fiduciary duty to manage such resources for the common good with the public as beneficiary.

Steve Cotton Director of the Alaska Trustees states that the State of Alaska has violated multiple provisions of Article VIII, by issuing various permits allowing exploration of the Pebble site. The permits, he says, are issued out of sight, and with no notice or input from the public. Exploration activity around the proposed Pebble Mine site has been ongoing and invasive.

Cotton says the State Department of Natural Resources has violated the law by not providing proper public notices and hearings about exploration activity at Pebble. He says only one notice has ever gone out. He told Fish Radio:

It’s the one and only notice the state has ever provided in 21 years of exploration at Pebble. It was put up on the state’s internet site. It wasn’t’ mailed out, it wasn’t’ published in a newspaper – they don’t even call it a real notice. They know it’s inadequate so they call it a ‘courtesy notice.’ And say it’s not legally required and it doesn’t’ even mention the Pebble mine. And of course, many people in the region, including most of the clients in this case, don’t even have internet access.

Cotton says the people in the region “are at the breaking point,” and a lawsuit seeking a preliminary injunction to stop all exploration at the proposed Pebble Mine site until a judge rules on the case is needed.

The current two year exploration permit that was issued earlier this year, allows Pebble Limited Partnerships to drill 425 bore holes – some as deep as 7,000 feet. They can dig 320 test pits and set 220,000 feet of seismic line s– along where the explosions are set off – they can put helicopters in the air 24/7 making hundreds of trips per season, and they can withdraw tens of millions of gallons of water from streams and ponds in the area, without even knowing if there are fish in the water they’re pumping from. That’s’ a lot of impact. No oil company could get away with this level of activity without public notice and comment, and without a searching public interest analysis by state regulators.

But Pebble Mine could employ hundreds of people for up to 50 years, the mining giants Anglo American and Northern Dynasty tell us. They always fail to remind us that if the mine pollutes the surrounding area, (which every other mine of its type has done) the largest sockeye salmon fishery in the world will be toxic marine roadkill, and hundreds of jobs will be lost for potentially hundreds of years.

The mine has been decried by Captain Sig Hanson of Alaska’s Deadliest Catch, a host of scientists, The Renewable Resources Coalition and even five major jewelry store chains including Tiffany & Co., Ben Bridge, and Fortunoff. Last Valentine’s Day, these companies joined others in the “No Dirty Gold” campaign swearing to shun gold coming from the Pebble Mine.

“We are committed to sourcing our gold and other materials in ways that ensure the protection of natural resources such as the Bristol Bay watershed. We would not want the jewelry we sell to our customers to jeopardize this important natural resource,” the pledge says.

Last November, Alaska residents were subjected to a massive ad campaign from an organization called “Alaskans Against the Mining Shutdown.” We were told to believe that mining means jobs, and that mining jobs are better than fishing jobs. Mining jobs, they told us, should exist despite the inability of the mining companies to guarantee the preservation of the Bristol Bay watershed, its fish, and those who depend on them to live and to work.

Pebble Mine is only one of the players in the corporate war on salmon that extends from Bristol Bay up the coast to the regions of Western Alaska struggling for their subsistence rights against the factory pollock trawlers decimating the salmon heading for the Yukon. This is only one effort, and it will be fought tooth and nail by powerful forces with lots of money.

Thanks to the men and women who stand up to fight these giants, and to ensure that Alaskans have a voice. We need every one of you; the Vic Fischers and the Bella Hammonds, and the villages in the Bristol Bay region, and the people who depend on clean salmon and clean water, and those of us who will be called upon to lend our support as the months roll on.

It will take a concerted effort for Alaskans to see through the spin, and the slick ads, and look clearly at where the true resource value of the state lies. We must learn to value the sustainable over the unsustainable. Our valuable resources don’t just come out of the ground.

Posted by AlaskanDave at 2:39 PM